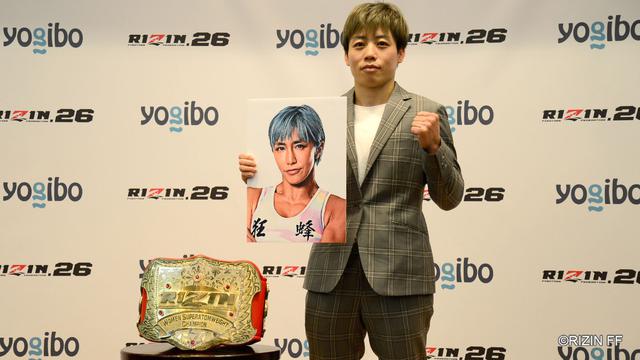 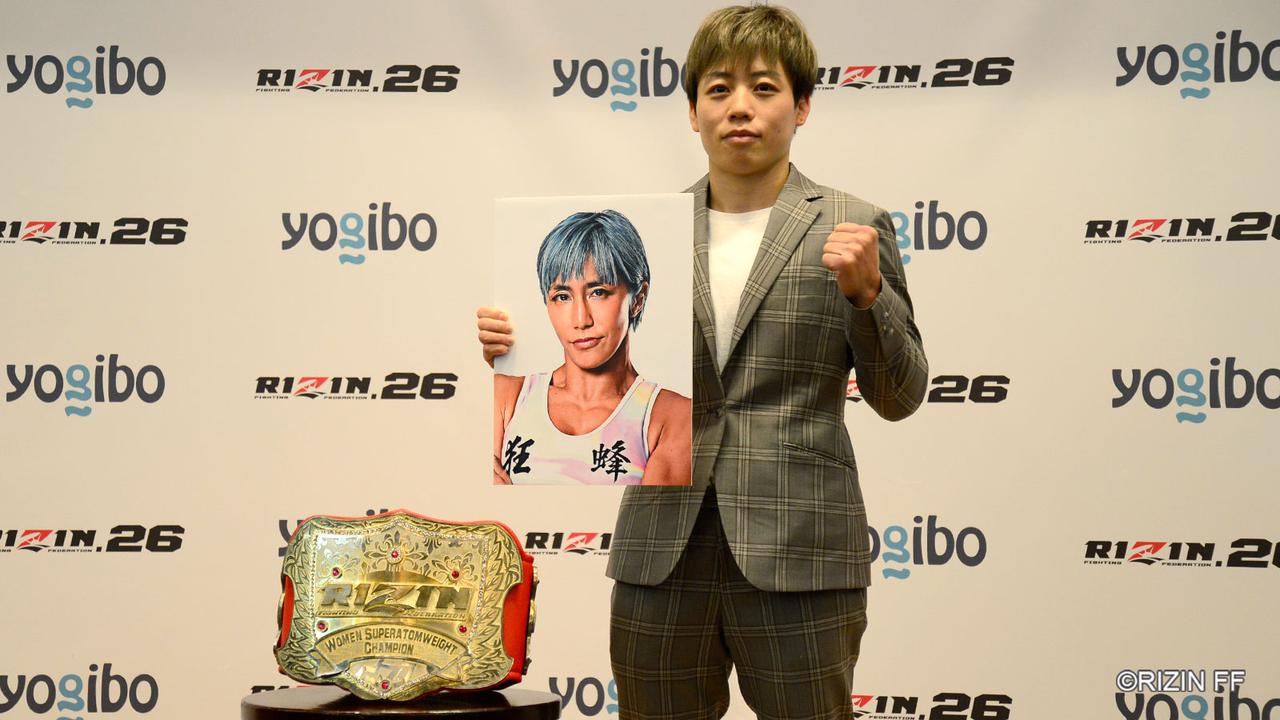 RIZIN.26 will be taking place on December 31st (Tue) at the Saitama Super Arena. 10,000 spectators will be allowed inside to attend the event due to the governmental requirements on the COVID-19 pandemic.

Former Super Atomweight Champion Ayaka Hamasaki (20-3) fulfills a long-awaited matchup against Miyuu Yamamoto (6-4) for the vacant strap. Hamasaki’s storied career includes winning the DEEP Jewels Lightweight Championship (which she defended thrice), and the Invicta FC Atomweight Championship (which she defended twice). She lost her crown in a rubber match against Ham Seo Hee last New Years’ Eve, but won a bout against Tomo Maesawa in August of this year. Yamamoto carries a plethora of wrestling titles, most notably winning gold at the World Championships three times. An intriguing clash of styles; one with 12 finishes, one with none, put everything on the line.

Former Super Atomweight Champion Ayaka Hamasaki (20-3) fulfills a long-awaited matchup against Miyuu Yamamoto (6-4) for the vacant strap. Hamasaki’s storied career includes winning the DEEP Jewels Lightweight Championship (which she defended thrice), and the Invicta FC Atomweight Championship (which she defended twice). She lost her crown in a rubber match against Ham Seo Hee last New Years’ Eve, but won a bout against Tomo Maesawa in August of this year. Yamamoto carries a plethora of wrestling titles, most notably winning gold at the World Championships three times. An intriguing clash of styles; one with 12 finishes, one with none, put everything on the line.

43-year-old Hideo Tokoro (34-30-2) welcomes Shinobu Ota (0-0) to the world of MMA when they meet in a 61kg battle under Japan’s premier banner. Tokoro debuted in September of 2000 - when Ota was just 6 years of age. Tokoro, a natural flyweight, has competed against opponents weighing as much as 88kg (194lbs). Ota has won gold at the Asian Championships, Asian Games and World Championships, along with a Silver Medal at the 2016 Olympic Games in Rio. However, the former DREAM Bantamweight Grand Prix Champion is no stranger to facing wrestlers, and this will be a true baptism by fire for Ota.

RIZIN Super Atomweight Grand Prix Champion Kanna Asakura (17-4) faces undefeated Killer Bee prodigy Ai Shimizu (5-0). Asakura has come a long way since losing her RIZIN debut in 2016; going 11-2 with a brace of wins over fan-favorite RENA. Despite having a strong case to contend for the belt, both of her losses were to Hamasaki and Yamamoto. Shimizu has 3 wins by stoppage and comes forward with an aggressive, fan friendly style, utilizing soccer kicks and stomps.She may prove to be Asakura’s most dangerous opponent yet.

Naoki Inoue (14-2) is granted a step up in competition as he takes on Yuki Motoya (26-8, 1 NC). Inoue is a UFC veteran who has gone 2-0 in the RIZIN ring, last stopping Shooto Watanabe under 2 minutes at RIZIN 22. Motoya is the former DEEP Flyweight and Bantamweight Champion, losing the 61kg title against fellow top contender Victor Henry, which started a 3-fight skid for the Japanese veteran. However, a hat trick of wins in 2020 including a 3rd round submission over Uoi Fullswing at RIZIN 23 has completely turned things around. Can Motoya go 4-0 on the year, or will Inoue prove himself as a legitimate contender for RIZIN’s glamour division?

Kyohei Hagiwara (2-3) squares off against kickboxer-turned-Youtuber-turned-mixed martial artist Ren Hiramoto (KB: 11-4, 6 KOs | MMA: 0-0). Hagiwara has never gone to the judges, and won spectacularly at RIZIN 25 over Yojiro Uchimura with a brutal one punch KO in 22 seconds. Hagiwara’s 4 fights in 144 days stands as a record in RIZIN history. Hiramoto holds a multitude of amateur kickboxing titles, but twice finished as a runner-up in professional tournaments. He was ranked as a top-10 featherweight for 2 years until transitioning to MMA earlier this year. The fans are guaranteed fireworks between these two.

Minowaman (65-43-8) makes a glorious return to action against Sudario Tsuyoshi (1-0). Minowaman is known to all hardcore MMA fans, last competing 18 months ago and flying under the radar since. The second of two matchups with large age differences between opponents, Minowaman made his MMA debut a full year before Tsuyoshi was born. With over 100 MMA fights across 3 decades (and now, a 4th) Minowaman’s lack of size is more than made up for with experience. Interestingly, Tsuyoshi is the older twin brother of fellow Sumo champion, Takagenji, and they are the first twin brothers to ever reach the rank of jūryō. Tsuyoshi is making his second appearance in RIZIN after a 1st round TKO victory over Dylan James. Tsuyoshi has been training with Japanese legend Enson Inoue, and is looking to have an impressive showing against a well known name in MMA.

Lastly, a true grappler vs striker matchup sees Ulka Sasaki (22-8-2) return from a 14-month layoff against Kenta Takizawa (11-6). Sasaki’s last outing was a 54 second defeat against current champion Kai Asakura in which he suffered a broken jaw from a clean hook. Sporting a 1-2 record in RIZIN, Sasaki’s status as a top contender hangs in the balance, despite being a former Shooto Champion and UFC veteran. The ADCC Asia Trial Champion has won 11 out of 12 submissions by rear-naked choke. Takizawa’s last outing was just weeks ago at RIZIN 25, where he put on a respectable performance in a unanimous decision loss against Hiromasa Ougikubo.

Ayaka Hamasaki
“Miuyuu Yamamoto has been an idol of mine for such a long time. I am very excited to be facing her on such a great stage. Please look forward to a great masterpiece on a great night and great stage against a great opponent. Miyuu’s physical strength is outstanding and she has grown as a fighter, I don’t think I will be able to beat her easily.”

Miyuu Yamamoto
“I am truly grateful for Sakakibara and the people who worked hard to give me such an opportunity during this global pandemic. I am very excited to be able to perform in the ring on New Year’s Eve. I made my professional debut in 2016 and I may have had some detours but I have finally made my way to a world title fight. I think this fight against Ayaka Hamasaki will be my grand sum of what I have lived for. Please look forward to the fight.”

Kanna Asakura
“This will be my 5th NYE appearance since I have made my promotional debut. I feel that I have grown with RIZIN and am very proud of what we have become. Ai is a better wrestler than me but I am a better MMA fighter. I will take her on with respect.”

Ai Shimizu
“Asakura is a well respected top female fighter but I will do my best to beat her.”

Yuki Motoya
“This will be my 4th fight this year and I will be facing a good competitor Inoue. I’m excited for this fight. I plan to beat him in a great way and take the spotlight.”

Naoki Inoue
“I am excited to be able to face such a veteran as Motoya on my 3rd fight in RIZIN. I want to beat Motoya in a memorable way so that people will know that I deserve a title shot.”

Kyohei Hagiwara
“I will be fighting 4 events in a row which should be a record. I know this fight will be full of fireworks and I am very excited for this. Fans should have fun. Hiramoto will be making his MMA debut so I plan to give hima rude welcome. I will take mount and bloody up with elbows”

Ren Hiramoto
“Hagiwara has no idea what he’s up against. He’s just there to make me shine. This fight isn’t about Hiramoto vs Hagiwara. This fight is Hiramoto’s MMA debut. I’ll show the difference between what we have as a fighter. I look forward in choking him out”

Minowaman
“Hello it has been a while. My name is Minowaman. Japan has entered a new era which is called REIWA, but I have adjusted my style to the new era. Sakakibara thank you very much for this opportunity. Sudario is a big strong young athlete and I will take him on Minowaman style. The theme for this fight is [Explosive inspiration]”

Sudario Tsuyoshi
“I have never stopped training since my debut, and I cannot wait to show everybody my improved self as a MMA fighter.”

Ulka Sasaki
“It has been a very tough year and I want to show my frustration and everything I went through on NYE.”

Kenta Takizawa
“ I thought too much during my last fight. This time I would like to fight with instinct and showcase what I can do against a crafty opponent.

Hideo Tokoro
“I am ecstatic to be able to fight on the NYE event once again. I can see that Ota is taking his MMA transition seriously, and I feel that it will be hard beating him, But I would like to do my best to show the appeal of MMA and the fun aspects of this sport.”

Shinobu Ota
“I’m very excited and grateful to be able to perform in the platform I’ve been watching my entire life. I hear many people saying I’m taking MMA lightly, but I am aware of that. But I have been training hard and there is a reason why I decided to make my debut. I have no plans to lose.” 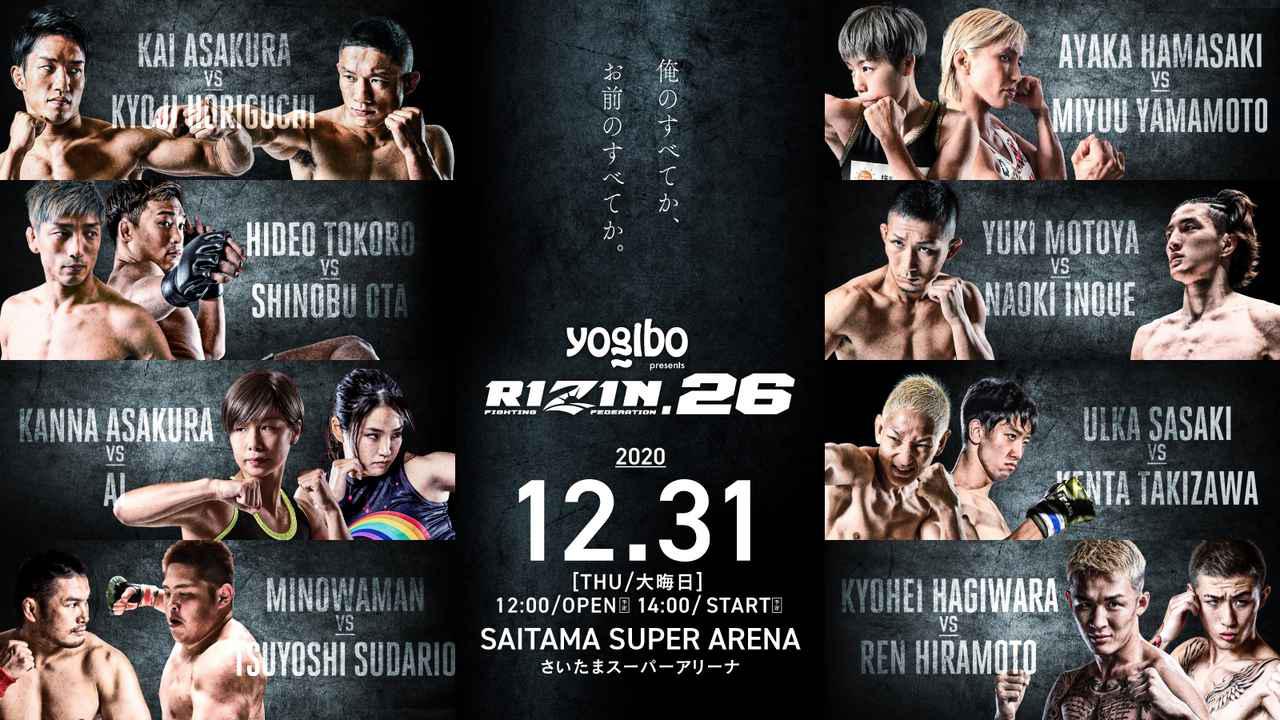 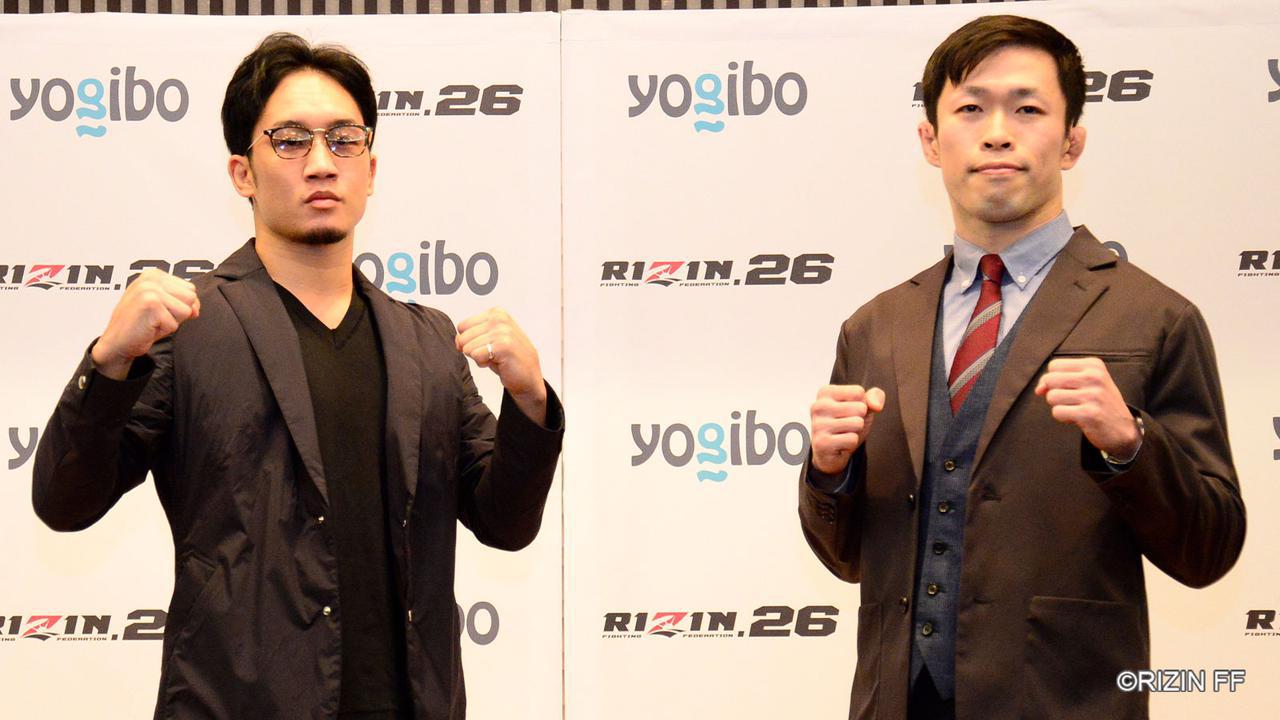 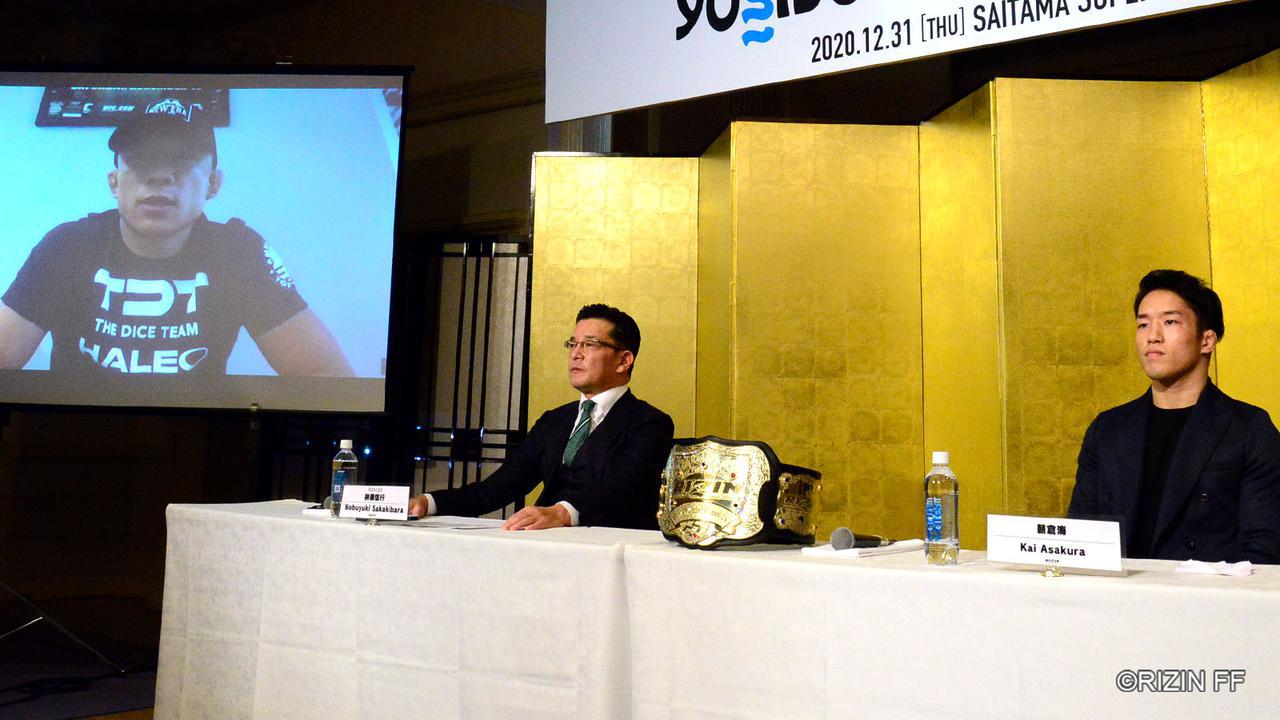