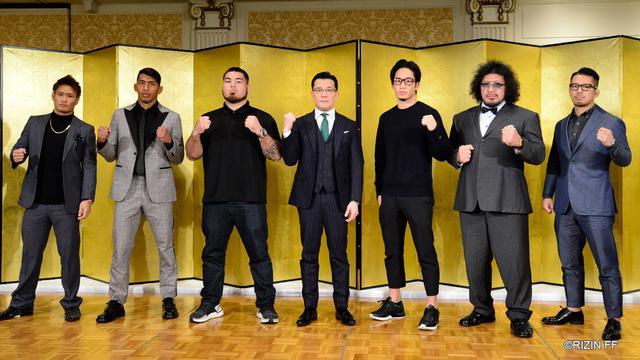 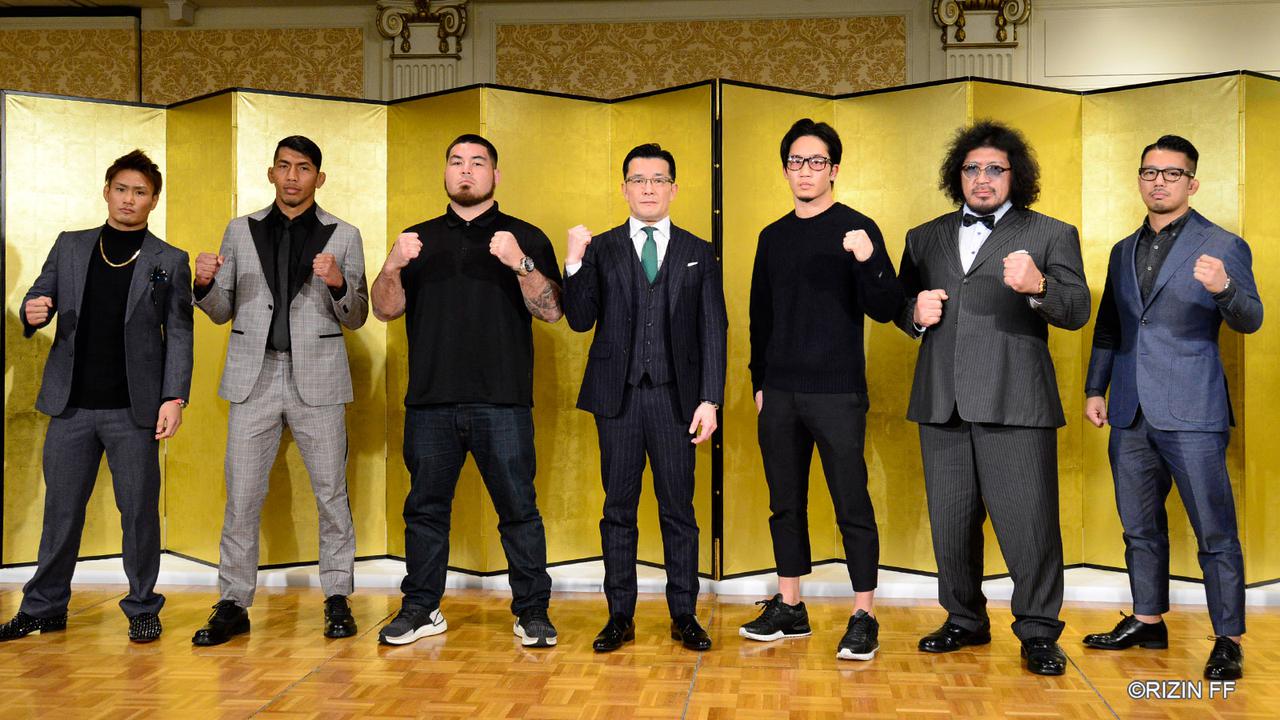 RIZIN.21 will be taking place at the Hamamatsu Arena on February 22nd. This event will usher in the new decade, and marks the promotion’s 24th event overall. This is the promotion’s first time hosting an event prior to the traditional sakura season April card. 11 fights have been announced, with the Bantamweight division once again taking the marquee event.

TOKYO – On January 24th, RIZIN FIGHTING FEDERATION held a press conference. The promotion announced 11 fights. UFC veteran and former Sengoku Featherweight Champion Masanori Kanehara (27-13-5) will make his RIZIN debut after nearly 22 months away from competition. He takes on Victor Henry (19-4), whom he defeated via foot lock at Quintet Fight Night in Tokyo back in 2018. However, Henry is riding a 7-fight winning streak that dates back almost exactly 2 years from the event, collecting the DEEP Bantamweight Championship against RIZIN regular, Yuki Motoya, as well as a spectacular front kick knockout against RIZIN Bantamweight Grand Prix Semifinalist, Takafumi Otsuka.

Naoki Inoue (12-2) squares off against Trent Girdham (12-3). The two young prospects bring a classic grappler vs striker match-up to the Hamamatsu Arena. Inoue went 1-1 in his stint with the UFC, and is looking to announce himself to the Japanese fans once again after going 9-0 in DEEP’s flyweight division. Despite Girdham’s pedigree as a striker (winning a boxing match just 3 months ago), he showed his mettle as a grappler, going over 12 minutes with Victor Henry before succumbing to a tight reverse triangle choke.

Vugar Keramov (14-3) brings his 10-fight (9 finish) win streak against Kyle Aguon (13-8) in a featherweight bout. Keramov is a teammate and fellow countryman of the newly-crowned Lightweight Grand Prix Champion, Tofiq Musayev, and recently made a successful debut at Bellator 234 with a 1st round knockout victory. Aguon is a tough test, as he is coming off a split decision loss for the Pancrase Featherweight Championship last October. The Guam native is 4-2 in Pancrase - and also holds a win over the current featherweight champion. Rounding out the Bantamweight matchups, Kenji Katoh (10-6) will fight
Kintaro (12-8-2). Katoh is 7-2 in his last 9 fights with 4 of those coming by knockout. Kintaro is 4-1 in his last 5, and last competed for the Pancrase Bantamweight title in July of last year, losing to Rafael Silva.

Hideki Sekine (7-3) started his career 7-0 before falling to Brandon Vera for the ONE Championship Heavyweight title. After 2 more losses, he returns to action against DEEP Openweight Champion, Roque Martinez (14-5-2). Martinez recently defended his title against Seigo Mizuguchi, finishing the challenger via knockout in round 2. This will be the Guamanian’s 5th match in RIZIN, and looks to get his first win in the ring since RIZIN 12.

Marcos de Souza (8-2) returns to the RIZIN ring after vying for Bellator’s #1 contender match against K-Taro Nakamura. The former RFC Welterweight Champion faces Falco Neto (11-10) in a 80kg catchweight bout. Neto is a teammate of RIZIN Bantamweight Champion, Manel Kape, and is coming off a loss against undefeated Bellator prospect, Fabian Edwards.

For the main event, recent Youtube sensation Mikuru Asakura (12-1) has a quick turnaround, putting his 7-fight win streak on the line against Daniel Salas (16-6-1). “El Cazador” was a member of The Ultimate Fighter Latin America Season 2. Asakura recently defeated John Macapa at the New Years show, and I slooking to bring his 3-fight decision streak to an end with an exciting finish.

5 kickboxing bouts will be taking place at the Hamamatsu Arena. RIZIN has been putting on kickboxing bouts at the regional events and all have delivered and has become a platform where many kickboxers get to shine.

Mikuru Asakura
“I know I can put on an entertaining fight regardless of my opponent, so I ask that everybody to come to Hamamatsu to watch the fights LIVE and experience the fights. I’ve seen a few minutes of my opponents’ fights and I think he is very tough.”

Daniel Salas
“I look forward in showing my technique and strong heart to the Japanese fans.”

Vugar Keramov
“I’m very happy to sign with Rizin contract. For me this contract it’s a big chance to fight in one of the best events in the world and what I know about japan, they have a best fans in the world and I’m very happy to fight for this fans. In first fight I have strong opponent but I’m prepare for this fight with good fighters and do great camp. And after my friend Tofiq Musayev win the Grand Prix in last Rizin event I understand about I’m want to fight at Rizin. Thanks for this opportunity for Rizin i do my best in my fight. Oss”

Kyle Aguon
“I’m honored to be given the opportunity to fight in RIZIN. My opponent fights hard and is very gritty, so I am excited to be able to clash with such a fighter. This fight will be an exciting fight with fireworks.”

Victor Henry
“I'm looking forward to fighting a skillful veteran who has competed with the best in the world and I'm looking to get revenge for that slick footlocker he caught me in during our Quintet match.
Masanori Kanehara”

Trent Girdham
“I’m really excited to be making my return to the rizin ring on 22nd of February. I’m missing one thing in my career atm and that’s a win in japan I want this win really bad and I want to show the world that I can compete for the rizin belt by the end of the year and that starts with violently finishing Naoki Inoue. So expect the unexpected japan”

Naoki Inoue
“I’m honored to be fighting in the stacked RIZIN Bantamweight division. I’ve cornered my teammate Ulka Sasaki’s fights a few time and I have been wanting to fight on such a great platform in front of many fans so I am very excited that this is finally happening! I think this is this is my opportunity to show the Japanese fans what I am capeable of doing. Trent Girdham is a confident striker, but I will be able to take him on at every aspect of the fight so I would like to finish him and make a statement.”

Kintaro
“I’m grateful for the opportunity to fight on such a prestegious platform. I know many fans did some lobbying on social media for me, and I am glad it’s finally happening. I don’t have much of an impression on my opponent but I know my fights are always exciting so don’t miss it.”

Kenji Kato
“Nobody probably knows who I am, but I have been fighting regionally for over 10 years now. I’m very happy to be given the opportunity to fight in RIZIN’s first event in my home town, and I will do everything I can to not disappoint people who support me.”

Roque Martinez
“I’m very grateful to be called back to RIZIN. I feel that it is my responsibility to keep the heavyweight division active and to shine like in the PRIDE days. I want to be the face of RIZIN’s heavyweight division, and become a mainstay by putting on exciting fights.”

Marcos de Souza
“My RIZIN debut didn’t go as planned, but I really want to get a win in my second home Hamamatsu. I want to show the greatness of Jiu Jitsu, and want to showcase my Jiu Jitsu techniques to everybody.”

Falco Neto
“I'm very happy to fight at Rizin, it's a dream come true! Since I started practicing martial arts I always had the dream of fighting in Japan, in the old Pride! And now I'm going to fight at one of the Best Events in the World Rizin! My opponent has a solid ground, but Iam a complete Fighter and I believe I have a strong and solid game to win the fight!”